This Muslim Student's Powerful Response To Islamophobia Will Inspire Your Spirit

When Donald Trump said he supported a Muslim tracking database in the United States he sent shockwaves through the country. But one young Muslim woman refused to be shaken.

Marwa Balkar, a 22-year-old from Corona, California, took to Facebook to fire back at Trump's prejudice. Balkar says if Muslims were to have to carry, or wear a special badge to be identified she knows the perfect symbol to represent her religion: a blue peace sign. 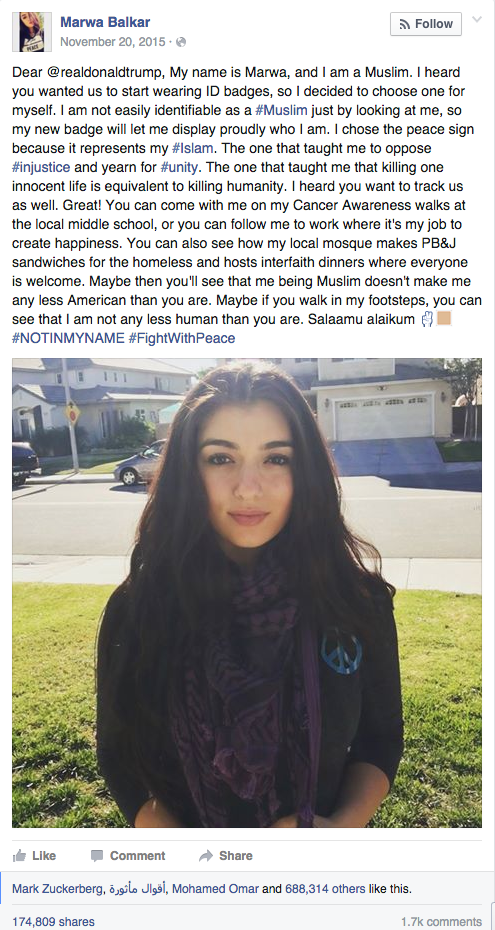 "I'm not easily identifiable as a #Muslim just by looking at me, so my new badge will let me display proudly who I am," she wrote in her eloquent post. "I chose the peace sign because it represents my #Islam. The one that taught me to oppose #injustice and yearn for #unity."

What's more, Balkar called Trump out on his desire to track Muslims in the best way.

"I heard you want to track us," she wrote. "Great! You can come with me on my Cancer Awareness walks at the local middle school, or you can follow me to worth where it's my job to create happiness."

Balkar worked as a member of the Disney College Program.

Her message inspired the hashtag #FightWithPeace, drawing attention to the fact that religion, race, gender, orientation do not make us any less American."