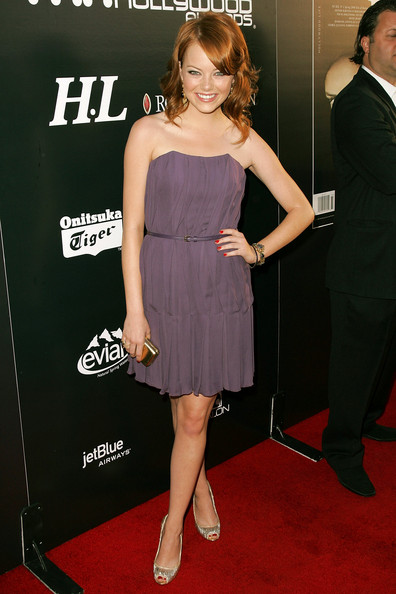 Back in the day, Emma Stone kept her look fun and young with this strapless dress. In 2007, the Super Bad star was just starting to hit the red carpet and this look was perfect for a new starlet who was getting ready to take over Hollywood. Only Emma can rock a mini-dress and look like she’s about to head to a royal ball. This star definitely knows how to keep it classy and modern at the same time. 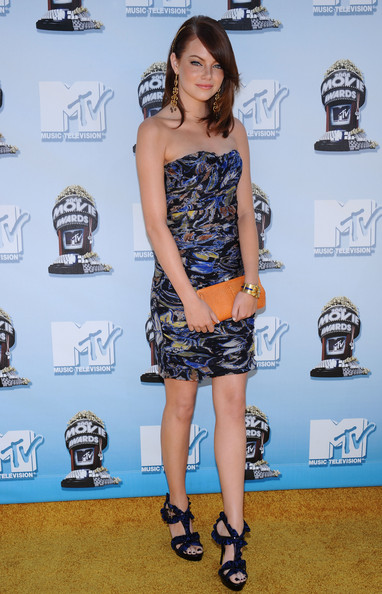 The MTV awards are always a great opportunity for big Hollywood celebs to create an edgy look. Emma upgraded her girl-next-door charm in 2008 with this bold pattern that was complimented with chunky heeled sandals. Stone even went with a more serious hair color for her big MTV appearance. 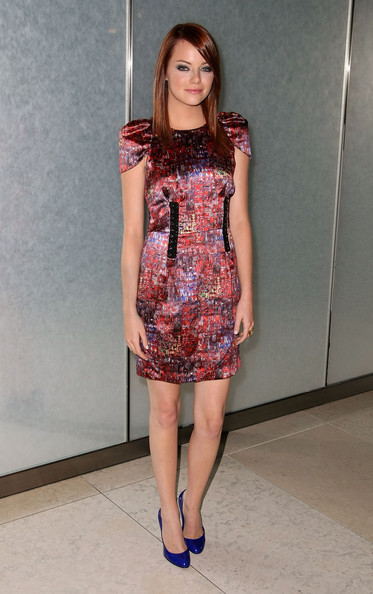 Emma loves playing with fun cocktail dresses and this red number may be one of the best in her closet. It’s not the most traditional look and she wears it perfectly. The shades of blue in the dress gave Stone the perfect opportunity to play with her shoes by adding classic blue pumps. This dress can get Emma down the runway or red carpet. 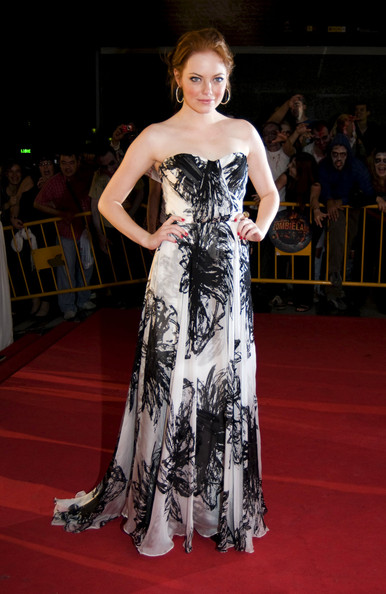 Fans and designers fell in love with Emma in 2009 when she started to hit the red carpet for Zombieland. At the premiere, Stone walked elegantly in this black and white number that certainly stood out from the rest of the guests. She was the star of the film and the red carpet that night. 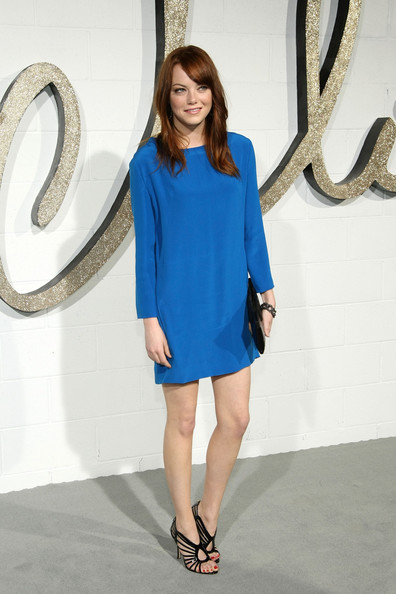 Emma loves to keep things simple when she has the chance. This amazing dress stood out with its electric blue shade and long sleeves. Her black strappy shoes and black handbag matched perfectly to give Stone a sleek look that is easy for fashion fans to emulate. 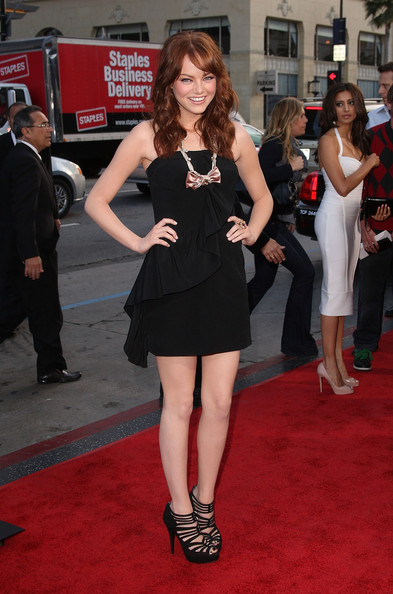 Emma Stone knows how to give classic looks a fun and modern style. This little black dress became a memorable piece when Stone decided to add a fun bow tie necklace with strappy heels. Even her flowing hair is a change for Stone who normally rocked straight bangs back in 2009. 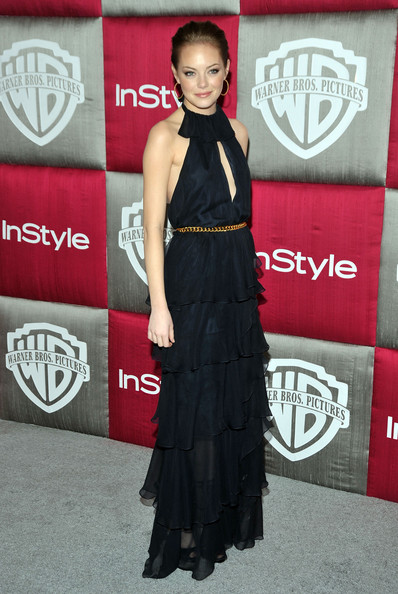 Emma loves walking the red carpet with elegant evening gowns. This amazing look stunned fans back in 2009 when she paired a gold belt with a high-neck black cutout dress. Stone tied this sophisticated by putting her hair up and using her makeup to portray a classic Hollywood beauty. 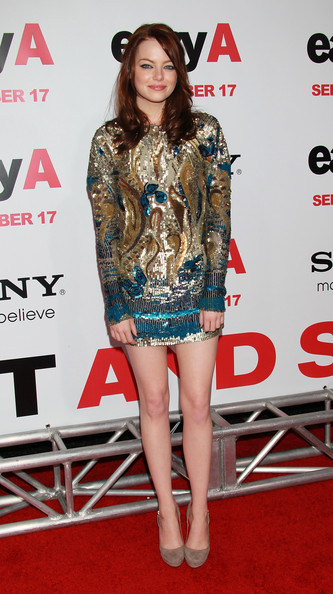 Sometimes, Stone loves to be different and sport something a little wild. It was hard to miss Emma’s look on this night when she walked the red carpet in a gold and turquoise sequined minidress. Her style matched the fun looks of fashion icons like Madonna who inspired millions with the sequin looks of the 80s’.

2010 To The One Shoulder Style 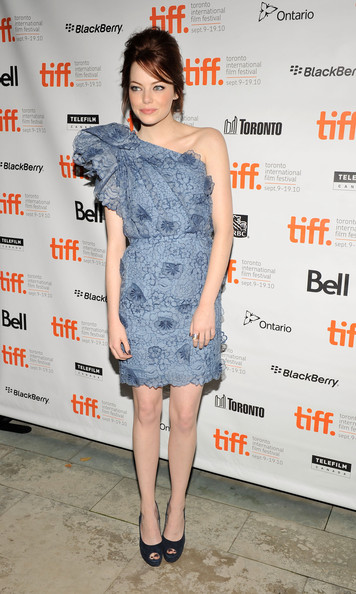 2010 was definitely a retro year for Emma. For this event, Emma wore a blue Stella McCarthy mini dress with beautiful floral patterns. The off the shoulder cut and big hair gave this beauty a look that could only be matched by Hollywood stars of the 1960’s or 70’s. 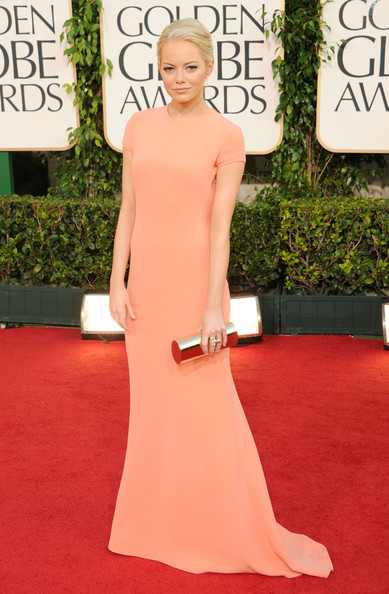 This incredible look will always be one of Emma Stone’s most notorious styles. She matched the golden theme of the night by glowing with blonde hair and a short-sleeved Calvin Cline dress. The peach shade and simple lines of this dress showed off Emma’s beautiful figure and truly complimented her amazing skin tone. 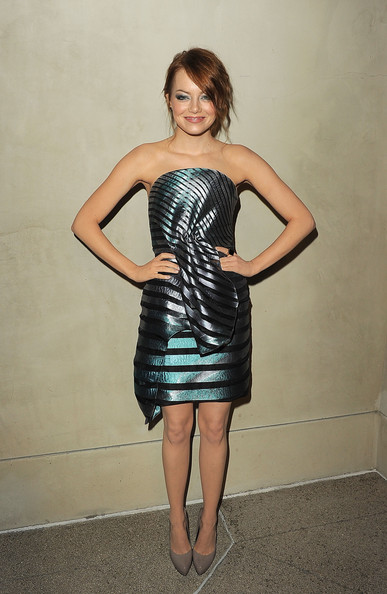 Emma is a favorite of all the top designers, including legendary Giorgio Armani. She stunned people with this bold turquoise and silver look that was tied together with a matching hue in her shadowy makeup. Stone is a big fan of the cocktail dress and this one certainly made an impact on fans that are used to seeing her in more simple shades. 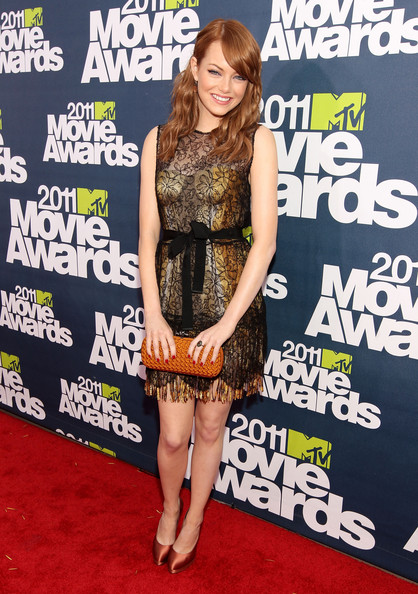 Bottega Veneta gave Emma this orange number that was brought to life with black lace. Her gorgeous flowing hair and clutch tied this look together to create a fun look for the MTV movie awards. On a night of crazy celebrity antics, Emma managed to look fun and youthful in a classic dress. 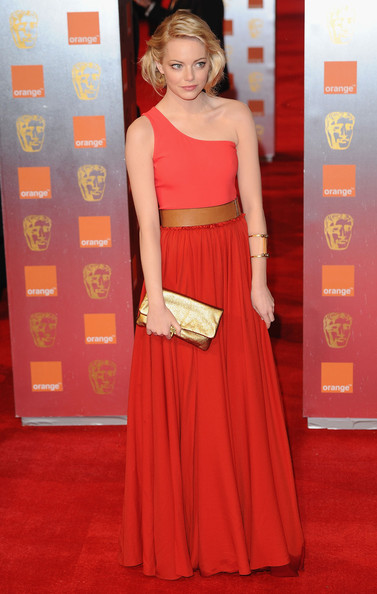 Emma showed up to this fall event wearing bright shades of autumn. The bold shades of this off-the-shoulder gown created and amazing ensemble that will always be remembered. This Lanvin dress stood out from the rest by completing the look with a brown belt that complemented Stone’s golden hairstyle. 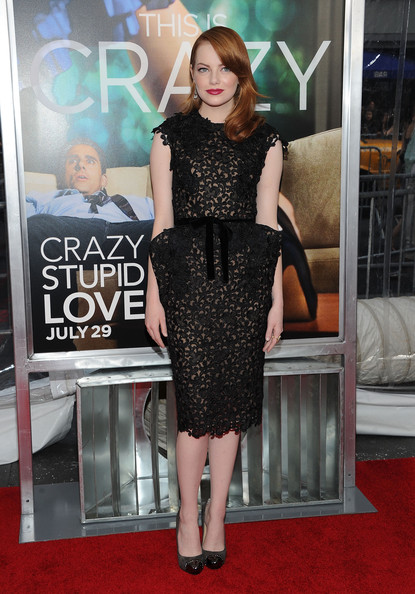 At the New York premiere of Stone’s hit movie Crazy Stupid Love, she rocked this sleek Tom Ford frock. This black number put a real spin on the little black dress. The lace and black bow gave Emma the look of a glamorous movie star from the past. 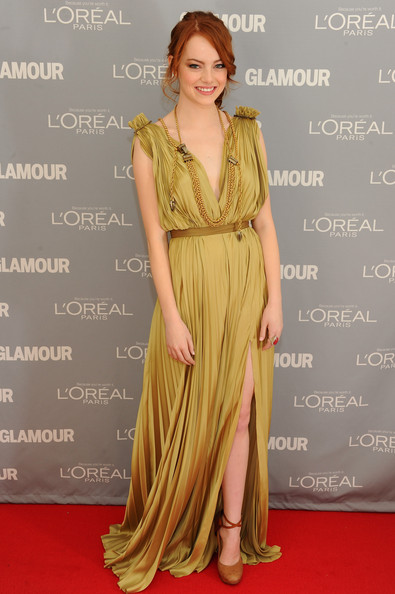 In 2011, Emma showed up to the Glamour Women of the Year awards as a fashion goddess. She rocked a long olive Grecian dress with golden accessories. Her makeup paired perfectly with both her amazing hair and gown. 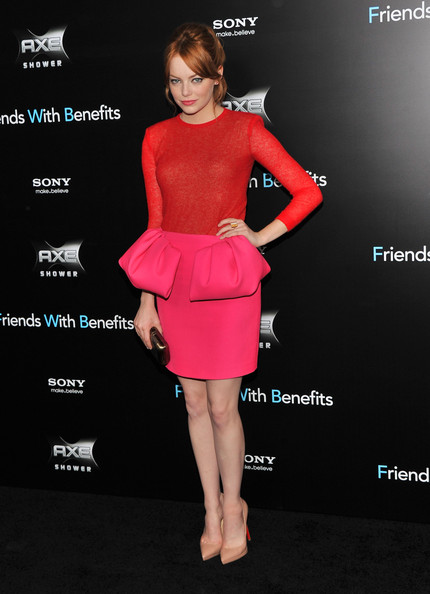 Emma proved that redheads could wear red when she showed up in this amazing long-sleeved dressed from Giambattista Valli. Only Emma can pull off a dress that is so clearly blocked with two bold shades. Pink is always a great color for Emma. But, this red top showed that she could rock almost any shade. 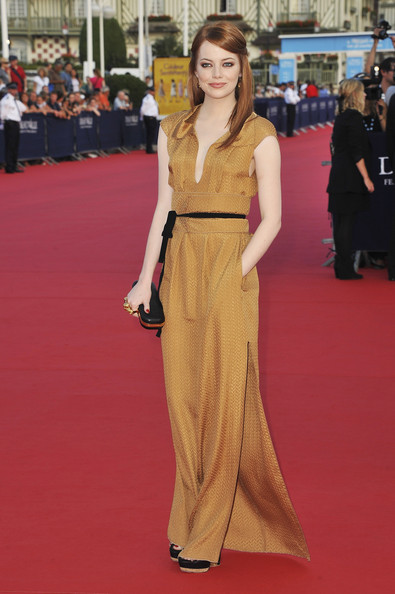 Just when you think Emma Stone can’t shock the fashion world, she shows up to the Venice Film Festival in this amazing frock. The mustard V-neck dress came full-circle with her mustard jewelry and her black accents. She loves trying dresses together with a bold belt and her black ribbon in this look definitely made an impression. 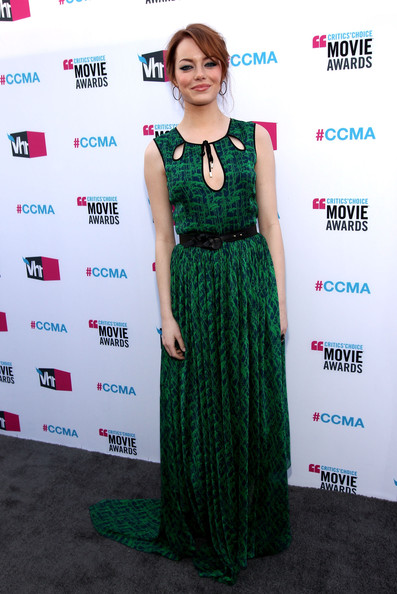 At the 2012 Critics Choice Awards, Emma Stone came out wearing a bold green maxi-dress. This amazingly vibrant shade contrasted her beautiful red hair to give her an unforgettable look. She even matched the black accents and edging with her sleek eye makeup. 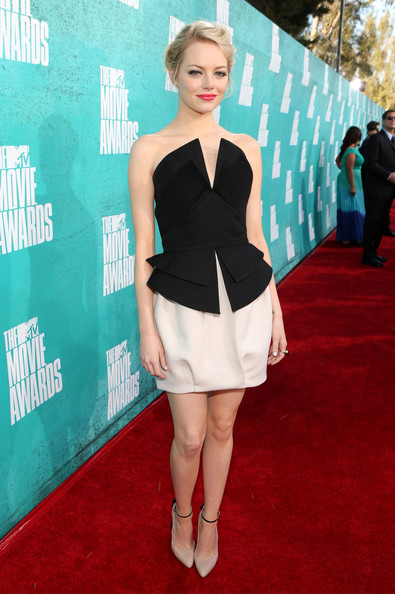 Emma shocked the fashion world when she wore a pink and red two-tone dress from Giambattista Valli. Her follow-up number kept the two-tone style but went for a simple contrast of black and white. This little Martin Grant look definitely gave her that fun but classy look that she loves to rock at the MTV awards. 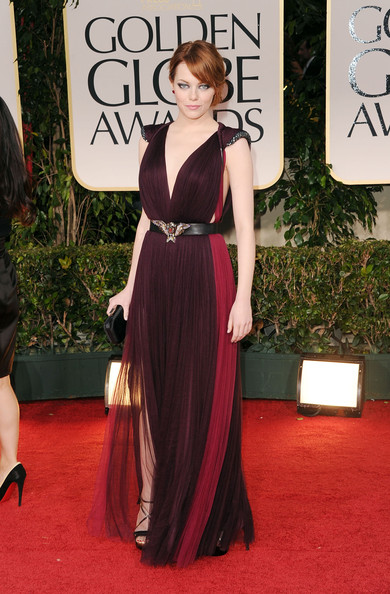 Emma has rocked just about every shade of red to compliment her amazing hair. This wine colored Lanvin dress proved that Stone is a goddess in French gowns. Some celebrities stay away from rocking red on the red carpet. But, Emma is bold and fearless with all of her looks! 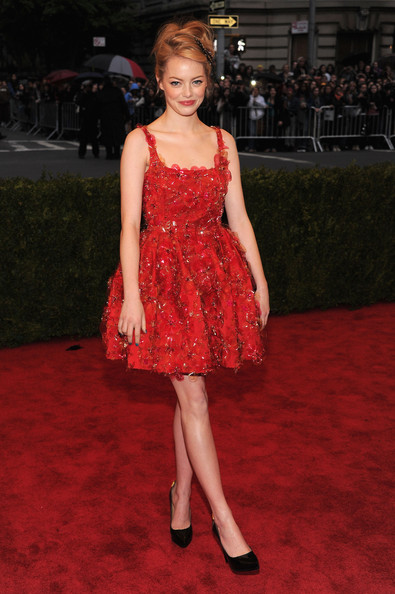 The Met Gala is the most fashionable event of the year and Emma Stone always shows up with an icon look. At the 2012 Met, she walked the red carpet in a completely red number by her favorite French designer, Lanvin. Her black shoes were the only part of the outfit that didn’t scream red!

2012 Strapless For The SAG Awards 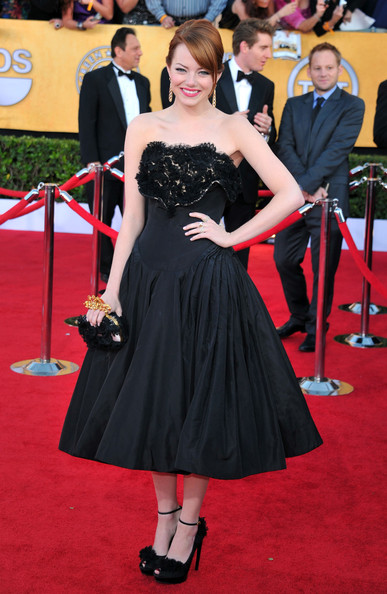 Emma knows how to sport a fun frock and this black number from the 2012 SAG awards may be her best yet. Alexander McQueen was the mind behind this amazing number that was complimented with gold jewelry and tall heels. Emma is always memorable when she puts on a strapless piece that shows off her amazing completion. 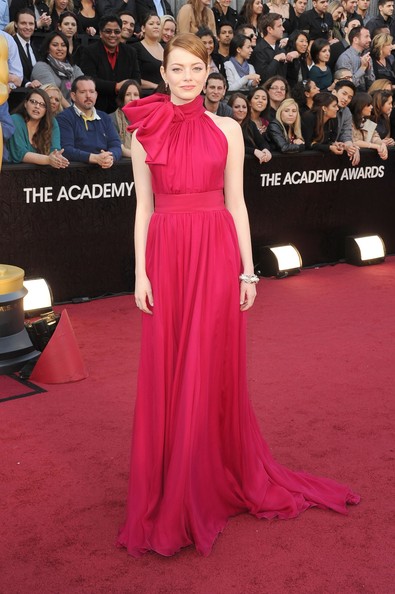 Emma knows how to wear an off-the-shoulder dress. This Giambattista Valli gown at the Academy Awards proved two things. Emma can always rock red and she loves wearing bows. She normally sports a bow around the waist, but this time, she went for a bold bow around the neck. 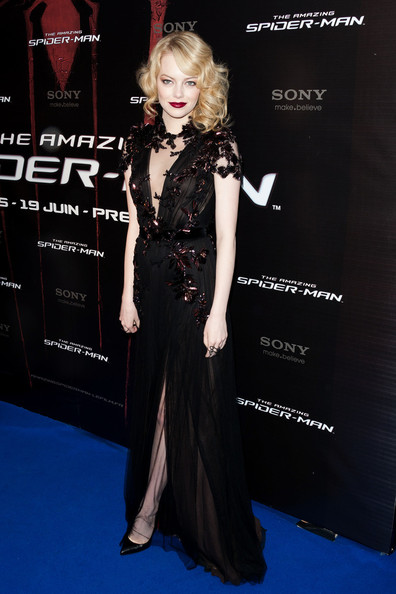 Sometimes Emma really surprised the fashion world by dropping her elegant look by taking her style to the edge. At the Amazing Spider-Man premiere, she sported this black number that was hauntingly beautiful. Every time Emma rocks her blonde locks, she loves to make them shine with contrasting colors.

2013 Casual With The Croods 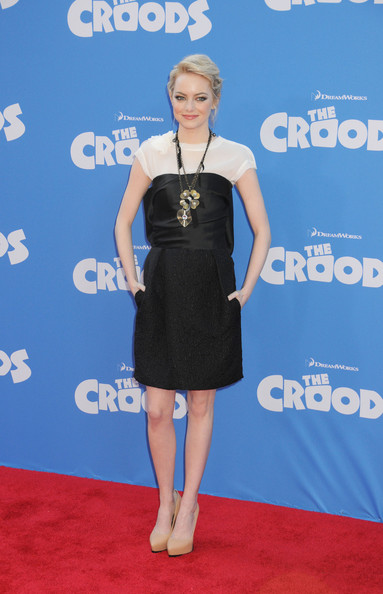 Who said Emma Stone can’t be casual? This star can pull off elegant gowns and simple looks like this outfit that she wore to the Croods premiere. Made by her favorite designer, Lanvin, this white and black number is great for an event for just an evening with friends. 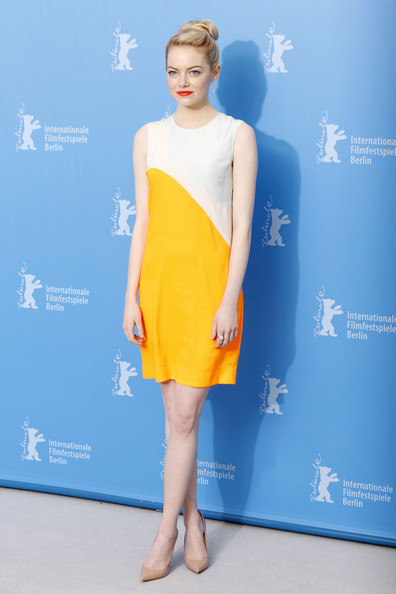 Emma rarely wears yellow. But, at the 63rd Berlin International Film Festival, she rocked an amazing two-tone dress that showed off the simple contrast of yellow and white. This bright Stella McCarthy was an amazing choice to show off her golden locks. 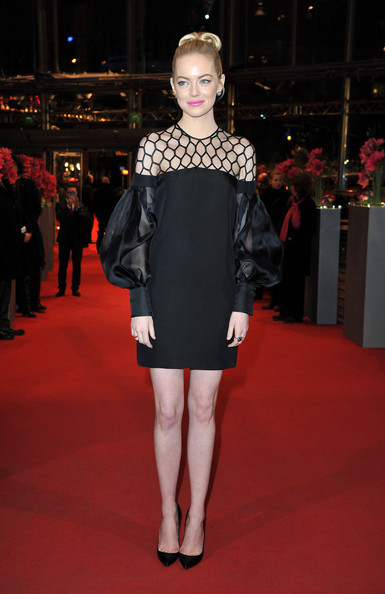 The little black dress becomes a whole new look when Gucci does it. Emma rocked this amazing long-sleeved number at a fashionable premiere. The entire look made black fun and young. But, her bright pink lipstick is what really made this look different from the rest. 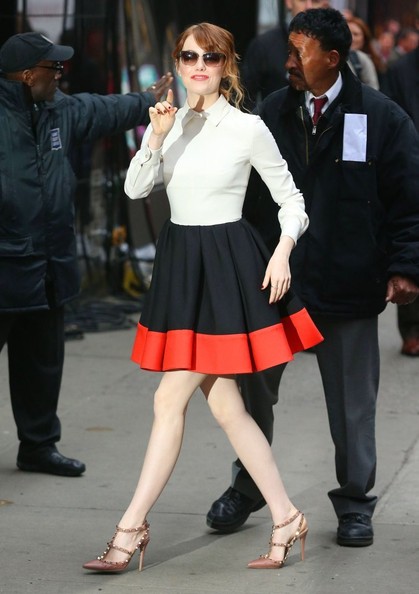 Emma treats every event like as an opportunity to let her fashion sense shine. When she visited Good Morning America, she stepped out wearing this breezy look created by Valentino. The combination of white, black, and red made it a simple but fun look that’s perfect for a morning interview that’s broadcasted around the country! 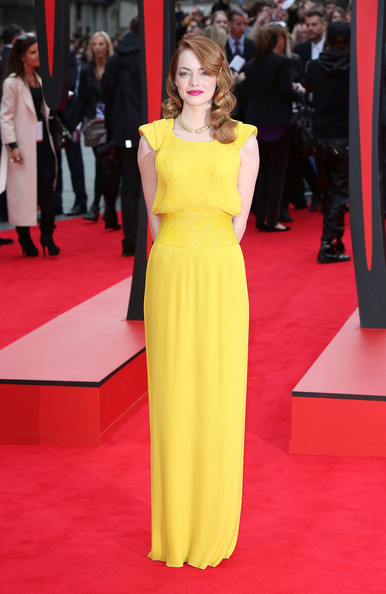 Emma brought some sunshine to London with this amazingly bright yellow number that she wore to the London premiere of the Amazing Spiderman 2. Made by Atelier Versace, this incredible gown made her pop off the red carpet. The contrast between the hair and the sunflower hue made this style a memorable London look. 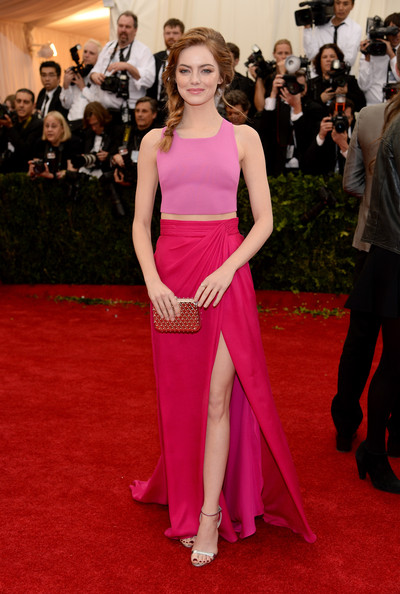 She loves to rock pink and red! Emma put together this amazing top and bottom with Thakoon. It’s an amazing outfit that truly stood out at the 2014 Met Gala where all the top celebrities show off their personalities.