21 Things Only Midwesterners Know About Winter

Winter in the Midwest isn't for the faint of heart. We've got wind chill that could slice, snow storms that leave you trapped in your house, and wardrobes that could rival the Michelin man's.

You could die waiting for the bus

Snow days are a thing of the past - the frigid weather temps are what will give you a free pass on a Wednesday morning! Mainly because it’s so cold that if you wait for the bus outside you will die. Good luck surviving, everyone! 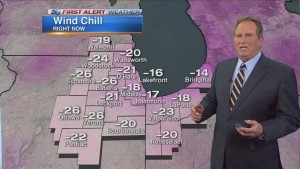 There’s a certain height of unshoveled snow you can fake-four-wheel-drive over when it comes to getting into a parking spot. After that height though, you’re stuck till spring.

Getting stuck in the snow

No matter where you are, if your car gets stuck in the snow strangers will help you push it out. You don’t even have to ask, they just start milling around. It’s code.

Shuffling across the sidewalk

You know the difference between 'walkable' ice and 'that’ll-break-my-legs' ice. One requires you to shuffle across with your arms out like a tightrope walker, the other you avoid at all costs unless you’re still on your parents’ insurance.

Sweating in your layers

No matter how cold it is outside, you will always be sweaty. Mainly because you have thirteen layers on and two of those are mainly there to protect your nice sweaters from said sweat.

Who cares about fashion?

Fashion stops being a thing once December rolls by. You’ve now entered survival mode: It’s nothing but ski masks and scarves wrapped up to your eyebrows from now on. Good luck out there in the tundra.

Even if it looks like the end-times outside, you can still drive across town if the mood strikes. All you gotta do is drive as slow as a wagon making its way down the Oregon Trail and hope no one skids into you. Let your friends know you’ll meet them at the bar in an hour – you’ve got this.

You don't even feel cold anymore

Even if your body feels like it’ll shatter from the cold, you know it’s just some time before it numbs out and you can’t feel it anymore. There’s no need to flag down a taxi just yet; your body will shut down and you won’t even notice the cold. Keep going.

If it snowed the night prior, you need to get out of the house by three in the morning and put a plastic chair in front of your parking spot. Hey, when you get a couple of feet of snow you begin to live in Mad Max days. You gotta do what you gotta do to survive. 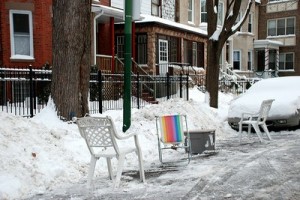 No fall and spring

There’s no such thing as “fall” or “spring.” There’s a sweltering summer and then you have cardigan weather for a week in September before the dark days of winter are upon us. And they last a good ten months. That’s right, ten months.

You judge people hard with weak bundle-up strategies. Do you see someone with a flimsy coat? You want to slap them. Notice someone walking around gloveless, with their hands raw from the cold? You roll your eyes at their amateur move. Notice someone waiting in line for the bar without a hat? What is this, the middle of May? You have the urge to take out a glove and challenge them to a duel.

If there ever was an apocalypse, these guys are clearly going to be the first ones to go.

The world is your freezer

If you want your too-hot dinner to cool down and don’t have the patience…just stick it out onto the balcony for three minutes.

Wondering how pigeons are still alive

Pigeons have somehow made a deal with the devil and have evolved passed the need to migrate. Just because it’s -30 outside and all animals are dead doesn’t mean you won’t see one of those mutant spawns trying to come up to you as you wait for your Uber outside.

You lose your sense of temperature

A “mild day” is 30 degrees. And the parkas are traded for windbreakers at 40 degrees. And you bust out the tanning oil at 50 because baby we’re barbecuing at the beach!

Climbing out of your second story window

Snow storms aren’t considered snow storms unless you have to climb out of your house via the second story window. As long as you can wade out into your car come morning, this is just another normal day.

February is the worst

February is the butthole of winter. That’s when you become convinced the earth’s core has stopped working because ohmygod the whole world is dead and forever will be dead. At that point, it seems like the end is nowhere in sight.

Three feet of snow? No biggie.

Anything underneath four feet is just “a light dusting.” Like, should you even slip into your snow shoes for that one? Heck, you can shovel your drive way without a jacket for that one, it ain’t a thang.

Ice puddles always run as deep as the Pacific Ocean. Don’t even try to splash through one. You’ll be stuck in a pothole that’s as deep as your knee.

Specials at your corner bar

We kind of love the snow